Please select a donation level below or DIY to enter a custom amount. Enter your mailing address in the comments to get a free sticker. All payments are processed securely through: 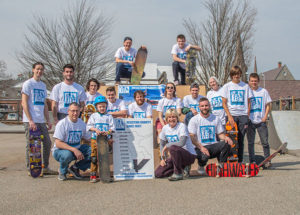 The effort to build a new Keene Skatepark on Gilbo Avenue recently received a boost from a legendary name in skateboarding.

The Tony Hawk Foundation awarded the park $10,000, according to a news release from the skatepark project organizers. The fundraising total now stands at $95,000, nearly a third of the way to the $300,000 goal for the park’s makeover.

“Our staff has watched the Keene Skatepark project for some time, and we are pleased to find our Board of Directors, including Tony, demonstrated our shared enthusiasm by awarding the project a $10,000 grant,” said Alec Beck, the foundation’s program manager, in the news release.

The city of Keene has also included $25,000 in the capital improvement program for fiscal year 2020 to go toward the skate park, which was first established on 9,800 square feet of space in a Gilbo Avenue parking lot in 1997.

“It was originally built with plywood and metal sheeting which has deteriorated over time,” said Andy Bohannon, the city’s director of parks, recreation and facilities. “A poured concrete facility will be inexpensive to maintain and will provide a safe, legal place for skateboarders and BMX riders but more importantly, it will provide a modern skatepark for these athletes to perfect their sport.”

For information or to donate, contact project coordinator Kathleen Burke at kathleenburke82@gmail.com; Andy Bohannon at 357-9829 or go to keeneskatepark.com 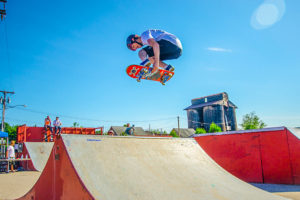 The proposed new Keene Skatepark is now bigger than in earlier plans, according to Project Coordinator Kathleen Burke.

Plans now call for the 9,800-square-foot park on Gilbo Avenue, previously slated for an overhaul, to move to the corner of School Street and Gilbo Avenue as part of the Monadnock Economic Development Corp.’s proposed arts corridor, Burke said.

The corridor would stretch along Gilbo Avenue between Main Street and School Street, extend to the Railroad Square area on the other side of Main, and include an outdoor performance space, space for artists to live and work and a welcome center.

But with the corridor plans still in the early stages, Burke noted that the park would be built in the lot at the southeastern corner of School Street and Gilbo Avenue independent of the corridor’s progress, and the city would be maintaining it.

Keene State College owns the lot, and even if the corridor doesn’t happen, would still allow the skatepark on the land, Burke said.

The new park would be a poured concrete facility, which Burke said is inexpensive to maintain. The current skatepark, made of plywood and metal sheeting, would be torn down.

With more space allotted for the project, Burke said the envisioned skatepark has expanded to between 12,000 and 15,000 square feet. The fundraising goal has also increased, from $300,000 to $325,000, to account for the bigger space.

As of Thursday, Burke said the project has raised $110,000 of its goal, and is still waiting to hear back on a few “very big donations.”

One big-name donation was for $10,000 from the Tony Hawk Foundation, awarded in April.

“We believe by the end of the year we should’ve met our fundraising goal,” Burke said.

If the goal is reached by then, she said the park will be designed this winter and built in the summer of 2020.

Anyone wanting to make a donation can visit www.keeneskatepark.com or make a check out to Pathways for Keene — Keene Skatepark and send it to P.O. Box 226, Keene, NH 03431. 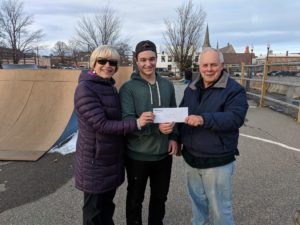 The project to upgrade Keene’s skate park recently received a financial boost from a local organization.

The Keene Kiwanis Club donated $5,000 to Keene Skatepark, a group of area residents seeking to overhaul the approximately 20-year-old facility on Gilbo Avenue, according to a Thursday news release.

The donation will go toward the $300,000 the group looks to raise to pay for a new poured-concrete skate park to replace the existing city-owned facility, which includes aging wood platforms and steel ramps, some of which date back to the late 1990s.

“This is a substantial donation for the Kiwanis Club and we are very grateful for their generous support,” project coordinator Kathy Burke said in the release. “We hope this encourages others to consider donating to this effort to provide a safe, legal space for skateboarders and BMX riders.”

This error message is only visible to WordPress admins

The design phase for a new skatepark in Keene should begin early Spring! In the meantime, check out this concept design from Kevin Brandolini. ... See MoreSee Less

Plans for a skateboard park at Worcester's Crompton Park trucking along

The master plan for a skate park at Crompton Park has been approved, and construction is slated to start this summer.

Thank you Emily Sodders for this great concept design for Keene Skatepark! We hope to get into the official design phase by February. Keep an eye out for postings for the meetings! ... See MoreSee Less

Dancing on a board 🏂Never seen something like this before 🥇 ... See MoreSee Less